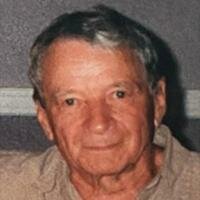 Adrian passed away peacefully on March 13, 2022, at the age of 92. He lived most of his life on the family farm south of St. Brieux off Hwy. 368. He was born September 12, 1929 to Ferdinand and Blanche Ranger, the third child of four. He grew up on the family farm and was proud to farm this land in adulthood. He worked seasonally in Saskatoon, but came back each harvest to lend a hand. He loved the prairies and the land itself. A very loyal, steadfast son, he was devoted to his parents. He was the reason they were both able to stay on their beloved farm, into their very advanced years. He remained a bachelor all his life. A truly caring son, brother and uncle. He was our good looking, well dressed, classy bachelor uncle. No pushover, he spoke his mind! Dementia stole him from us. We want to thank the kind medical and nursing staff of Parkland Place, who cared for him in his last years. His caregivers became like family to him and we can not thank you enough. He was a gentle soul. He is survived by his brother Ed (Carrie) Ranger of Saskatoon, many nieces: Lorraine, Linda, Marlene (Angeline’s girls): Elaine, Darlene, Janet (Ed & Carrie's girls): Gerald, Trina (Ferne’s children). He was predeceased by his parents, his two sisters; Angeline (Ebert) Woolsey, Ferne (Leslie) Haidenger. Two nephews Harold and Brent and his niece Corinne. Rest in peace dear Adrian. Your job is done. Memorial contributions in memory of Adrian may be directed to the Canadian Cancer Society. To plant Memorial Trees in memory of Adrian Joseph Ranger, please click here to visit our Sympathy Store.