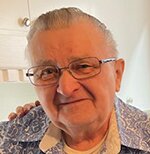 Please share a memory of Victor to include in a keepsake book for family and friends.
View Tribute Book
On April 15th 1942, in Yellow Creek Saskatchewan, Jennie and John Stefaniuk along with a local Midwife welcomed their second child and first son Victor Frank Stefaniuk to the family. From the beginning Victor and his older sister Anna were close buds. This bond continued to grow amongst siblings as their parents welcomed 8 more children to the family. Upon moving to the farm near Meskanaw when Victor was seven, he and Anna began their schooling at the McCloy Creek School. After elementary school Victor went to school in Yellow Creek. Here he met many life long friends. In his teen years and early twenties, Victor enjoyed many weekends curling at the local rink, socializing and attending dances. During one such weekend he met his wife of 46 years Linda Selnes. Vic and Linda wed in the fall of 1969 and began their life on the farm “up the hill”. Two years later along came their son Arnold and four years after him, their daughter Holly arrived. The foursome enjoyed life over the next several years camping, fishing, socializing and making many wonderful memories together. Vic enjoyed farming for many years. When he decided to stop farming he began a job at Bourgault Industries in St Brieux. After 19 years with Bourgault he retired from work. Retirement offered Vic the pleasure of tending to his garden, mushroom/blueberry picking, hunting, cooking, canning tomatoes and dill pickles and spending time with friends and family. Victor proudly held the position of President of The Struther’s Lake Wildlife federation, for many years and was an active member in this club chapter, that spanned more than fifty years. One of Victor’s greatest joys was being a Grandpa to Eli and Lou. Victor will be remembered as having a generous heart of gold. Never hesitating to help a friend or a neighbor out. Because of his quick wit and dry sense of humor old and young combined could relate to him and enjoy his company. He was well known for his friendliness and always had time for a visit and a drink. To know Victor is to have laughed with or to have shared a kind word, whether a close friend or stranger. Victor was pre-deceased by his grandparents Nick/ and Paranka Stefaniuk, William and Katie Bednarz, his parents John and Jennie Stefaniuk, his Inlaws Arnold and Lillian Selnes, brother Ed Stefaniuk, sister Lillian Stefaniuk, brother(s) in law Gordon Heynen, Henry Peters, Gordon Orenchuk and his dog Skippy (Skipper). Víctor is survived by his son Arnold Stefaniuk (LisetteFournier) daughter Holly Cenaiko (Jeff) Grandson Eli Cenaiko, Granddaughter Lou Cenaiko. Brothers, Joe, Walter, Frank (Lucille), Ron (Julie), Anna Heynen, Marion (Jim) Shuparski and Eileen Orenchuk. As well as his many nieces, nephews and friends. Memorial contributions in memory of Victor may be directed to Cared Heart of Jesus, New Tarnopol Cemetery.
To send flowers to the family or plant a tree in memory of Victor Stefaniuk, please visit Tribute Store
Tuesday
26
July

Look inside to read what others have shared
Family and friends are coming together online to create a special keepsake. Every memory left on the online obituary will be automatically included in this book.
View Tribute Book
Share Your Memory of
Victor
Upload Your Memory View All Memories
Be the first to upload a memory!
Share A Memory
Send Flowers
Plant a Tree